It’s been five years since pension holders were given the free-dom to draw directly from certain pension savings. What have we learned that can help those about to embark on their own retirement journey?

The pension reforms in April 2015 gave defined contribution pension holders “complete freedom to draw down as much or as little of their pension pot as they want, anytime they want,” according to the Chancellor of the time. After five years of experience in the UK – and many more in places like the US and Australia that have had similar rules for longer – we can draw some conclusions about the changes, and derive some lessons for the future.

Despite the sceptics’ almost immediate warnings that pension pots would be frittered away on Lamborghinis or world cruises, leaving the State to pick up the pieces, it has not worked out that way. After an initial rush to fully encash pension pots, the average amount withdrawn per person quickly declined. By the final quarter of 2019, nearly four times as many people were receiving flexible payments as in the second quarter of 2015, but the average payment had fallen by almost two thirds.

The relatively stable pattern of average withdrawals over the last three years suggests that the gloomy forecast of spendthrift pensioners was wrong. However, there has been a continued decline in the purchase of annuities to provide retirement income.

The latest data from the Financial Conduct Authority (2018/19) shows just 11% of pension plans being used to buy an annuity.

If you are at the stage when you are beginning to consider your retirement, there are some lessons to learn from half a decade’s experience of pension drawdown:

A full withdrawal can make sense for small pension pots, even though 75% of the amount received is subject to income tax under PAYE. As the pot size increases, income tax and the operation of PAYE become bigger issues. Full withdrawals account for nearly 90% of payments from plans valued below £10,000, but for only about 1% of pots of more than £250,000. 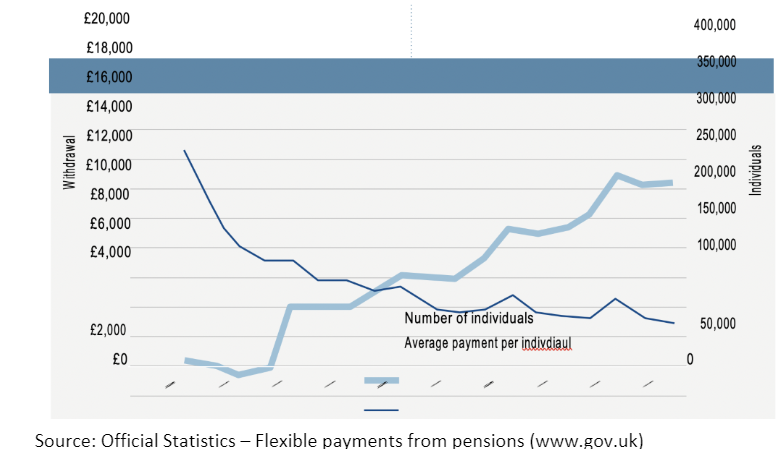 Flexi-access drawdown is by far the most popular means of drawing from pension plans valued at £100,000 or more. However, it is probably still too early to say whether those who choose this option without taking professional advice are making a sustainable level of withdrawals.

Flexibility in law may not mean flexibility in reality for your pension plan. Many providers of large group schemes, and insurers with pre-2015 pension policies, decided not to offer all the options that legislation permits. In some instances, the only flexibility is the ability to withdraw in full. If you find yourself with such a plan, you may wish to seek advice about transferring to a more flexible arrangement.

Whatever decisions you make about managing your retirement income, it's a complex area. To make sure you understand your options clearly, it is imperative that you seek expert advice.

Please pick up the phone and give us a call on 0208 515 1200 if you are worried or would like some advice or drop us a line at info@dukegodley.co.uk and one of the team will get back to you as soon as possible.

The value of investments, and the income derived from them, can go down as well as up and you can get back less than you originally invested.

Issued by Duke Godley Financial planning Limited, which is authorised and regulated by the Financial Conduct Authority. FCA Number 629938

Want to know more about
our services?

Speak with one of our team today to book a FREE Consultation or ask any questions about our Financial Planning services.

We are entered on the Financial Services Register No 629938 at  www.register.fca.org.uk

Levels, bases and reliefs from taxation are subject to change and their value depends on the individual circumstances of the investor.

The value of your investment can go down as well as up and you may not get back the full amount invested. Past performance is not a guide to future performance.

The Financial Conduct Authority does not regulate taxation and trust advice or Will Writing or advising on Lasting Power of Attorney.

The guidance and/or advice contained within the website is subject to the UK regulatory regime and is therefore primarily targeted at customers in the UK.